How to score your key results?

In a few words

Key Results are part of the OKR Model. Evaluating them allows you to track progress towards your objective throughout the OKR Cycle. Since a key result is based on an accessible metric, its evaluation is of course based on the new value of it.

But more, it is a question of assessing how confident the team is to be at the rendezvous, beyond the numbers.

Remember that this evaluation is made not for the purpose of reporting, but in order to make the right decisions at the right time, by the team, in order to achieve the objective.

An OKR brings change, and therefore uncertainty. Relying on the historical trend of your metric is not enough to manage. Waiting until the end of a cycle to react is not either. Key results are therefore regularly evaluated during the cycle. And since they define the success of the objective, let us set the rules of the game for their evaluation.

How to use it?

The progression of the metric

Let’s start by evaluating the progress of its metric by a simple ratio between its current value, its initial value and its target value, usually scored on a scale of 0 (no progression) to 1 (the target is reached). Then let’s define a category for the key result:

For example, Google uses “stretch” objectives, associated with the following color scale: Red for a progression between 0 and 0.3; yellow between 0.4 and 0.6; finally green and considered successful for an increase of at least 0.7.

Choosing a committed or ambitious category, by the key result champion, depends on the result but also on the company’s performance culture.

Consider the conversion rate of a landing page, as a key result, whose current performance is 1 per 1000 visitors. The team can commit to a conversion rate of 2.2 per 1000, aim for a target of 3.8 and have the ambition to reach 5 per 1000.

This model is interesting as long as the progression is not linear.

Progression is rarely linear, when it is related to change. This is where the judgment of the team responsible for achieving the target comes in. This is often a better indicator of success, less factual, than the progression of the metric itself. What we follow here is the outcome, more than its progression. Since it is a priori, we can use all kinds of qualitative tools to define and communicate this index: flags, weather, emojis, colors… And this is often done by team vote.

Radical Focus offers a model based on a scale of 0 to 100%. Its particularity is to define this confidence as soon as the key result is defined with a starting value of 50%! One in two chances of success, close to Google’s stretch goals, because it judges its ambition, but startup version, with an even greater uncertainty. We will especially remember its use: reviewed every week, any change in the confidence score triggers a discussion. Because the evaluation of key results serves above all to make decisions at the right time by the right people!

Finally, this information is shared with the organization, by all, whatever their values (failure or success), according to the principle of transparency of the method.

It is not advisable to use OKRs for individual performance evaluation. If this is the case, we advise you never to rely on the key results for the individual assessment.

It is natural that in Rising Goal we find this monitoring of the progress of key results as well as the confidence score. The latter is associated with a scale from 0 to 100% and a color scale. Being able to give a number makes it possible to aggregate this information for all the key results of an objective and all the objectives of a team, a department, an OKR cycle.

And thus have a metric to follow during the cycle. 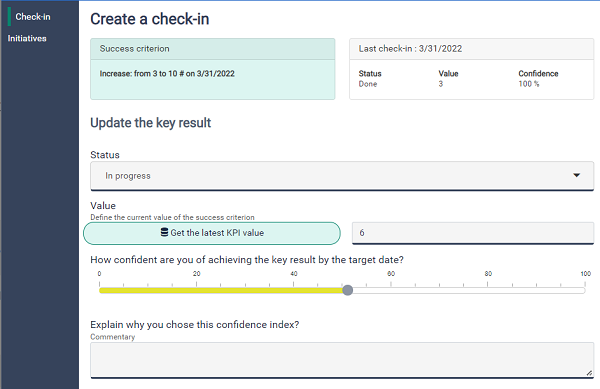 How to score an objective?

Scoring a key result is easy because it is based on a metric. But how to evaluate an objective, by nature qualitative? And Why?

OKR cycle will allow you to define and organize the life cycle of your OKRs in your organization. Set the medium-term and short-term goals. 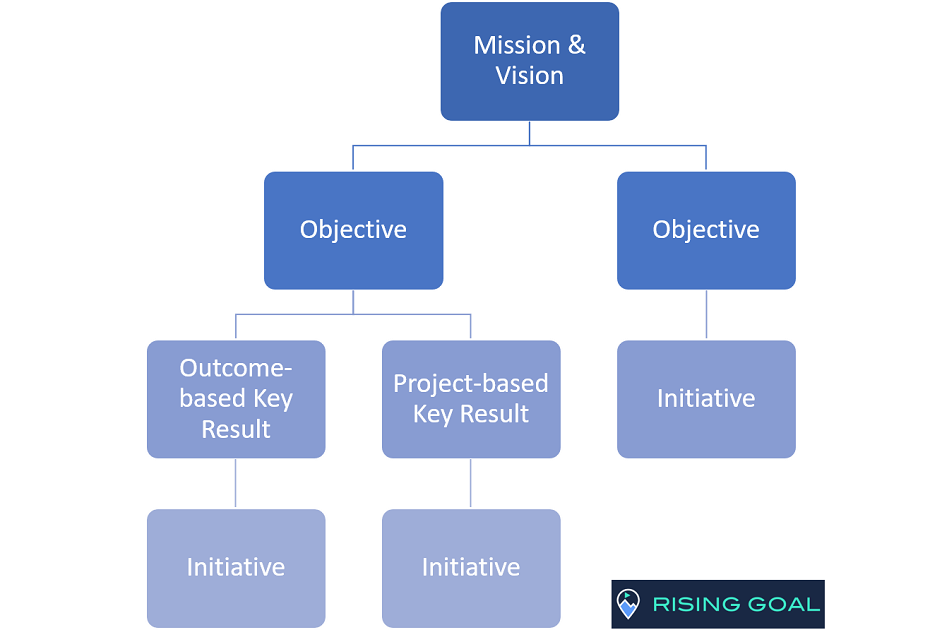 OKR Model is an agile methodology for collaborative goal setting practices. It stands for Objectives and Key Results model.

You have Successfully Subscribed!

This site uses Akismet to reduce spam. Learn how your comment data is processed.

We use cookies on our website to give you the most relevant experience by remembering your preferences and repeat visits. By clicking “Accept All”, you consent to the use of ALL the cookies. However, you may visit "Cookie Settings" to provide a controlled consent.
Cookie SettingsAccept All
Manage consent

This website uses cookies to improve your experience while you navigate through the website. Out of these, the cookies that are categorized as necessary are stored on your browser as they are essential for the working of basic functionalities of the website. We also use third-party cookies that help us analyze and understand how you use this website. These cookies will be stored in your browser only with your consent. You also have the option to opt-out of these cookies. But opting out of some of these cookies may affect your browsing experience.
Necessary Always Enabled
Necessary cookies are absolutely essential for the website to function properly. These cookies ensure basic functionalities and security features of the website, anonymously.
Functional
Functional cookies help to perform certain functionalities like sharing the content of the website on social media platforms, collect feedbacks, and other third-party features.
Performance
Performance cookies are used to understand and analyze the key performance indexes of the website which helps in delivering a better user experience for the visitors.
Analytics
Analytical cookies are used to understand how visitors interact with the website. These cookies help provide information on metrics the number of visitors, bounce rate, traffic source, etc.
Advertisement
Advertisement cookies are used to provide visitors with relevant ads and marketing campaigns. These cookies track visitors across websites and collect information to provide customized ads.
Others
Other uncategorized cookies are those that are being analyzed and have not been classified into a category as yet.
A
SAVE & ACCEPT
Powered by